Hindustan Times. Page 25. An article regarding Bayern Munich and selections. Boing! My antennas went up. Right away I followed the instructions and messaged the given number.

And exactly a month later, I'm standing at the Mssa grounds in between a few thousand. Registration done and play time was on call.

Luckily I found a few friends of mine, the Kumar brothers and a few of my school mates. It was like God was keeping an eye on me constantly when I was placed with my friends in the same team. I was comfortable and my game showed for it. The Kumar brothers and I qualified for the next round.

Again, I was with Praful, of the Kumar brothers, on the same side. We were combining really well. Someone crossed the ball in, with one touch Praful changed direction and BAM! Bottom corner. Praful was in for the final round. Later on, I was fouled at the 30-yard line.
A war of words broke out regarding who will take the free kick. With my mouth, there was only one winner. I placed the ball with love.  Caressed it. Aiming for the top corner I took my stride and sweetly struck the ball. It didn't reach the intended target but it lay perfectly in the bottom corner. The keeper didn't even attempt to save. What luck! I too made it into the final round along with the Kumar brothers.
The final round was scary. Alex Ambrose, a living legend of Indian football, was the chief selector. And my match was in the end. The final game. Everyone played extremely well. I really don't remember what happened in the match. But all I know was that I gave my 500%.

God repaid my hard work with a spot in the top 26 out of 1200. We were divided into two teams. A and B. I was placed in Mumbai-A. Mumbai-A was the dream team. We were unstoppable. We headed for Pune later that month. The whole squad gelled really well with a really smooth flow.

We were supposed to play the Pune A & B sides as well as the Mumbai-B in a round robin style tournament. The top 2 teams would play in the final. And the best player from the entire tournament would be selected to fly to Germany to train in Bayern's world-class academy!
We all gave our all. I captained and even assisted a few goals playing in the centre of the park! We played the best football Pune has seen. We killed each side.

Praful, Melroy and I were on the shortlist for the best player as part of the top 3 of the tournament. But in the last match, Melroy suffered from cramp, Praful's game deteriorated and so did mine. And in a matter of minutes, my dream of going to Germany shattered. 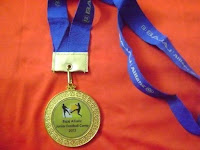 Nevertheless, my team did well as we won the inter-city tournament and took the trophy back home to Mumbai. Each player got a cash award of Rs. 5000, a personal trophy, a shirt, a medal, a football and a ride back home with memories that I can never forget. I worked my socks off and was repaid with a Pune FC scout approaching me with the news that I had made the cut to be part of their Under 17 team. My hard work off the field and on was finally getting recognized.

I didn't get selected to head to Bayern Munich, I didn't maintain my game throughout, but hey, look at the positives. I made my mark in Pune, I made a whole lot of friends, I improved my game and I crossed another hurdle in my journey.